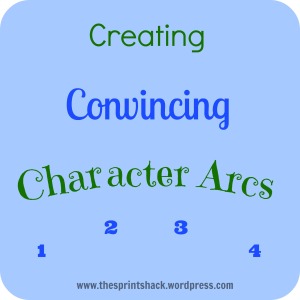 A character arc is the full spectrum of the character’s change throughout a story. While many writers have different names for each step of a character arc—or, if you Google the term, numerous complex and often scary-looking graphs—the idea remains the same. Namely, a character ends in a different place from where he or she started.

Some writers list these steps in three, some in four. The following are my take on the steps required to build a three-dimensional character (and story!). If you’re the type of writer who hates outlining and feeling restricted, the following steps might scare you. Don’t worry—they aren’t as bad as they look!

1) Goal/Desire: This shouldn’t be a surprise, and even if you aren’t thinking about it when writing, you’re probably setting this up already: at the beginning of a story, a character must have a goal or desire to work toward. Of course, this can come in many forms, both positive and negative, good or evil. Sometimes, the goal or desire is subtle, such as a character wanting to remain passive and unchanged through a series of events outside his/her control. Unfortunately for him or her, that’s not going to happen.

2) Conflict: This is where the character meets all kinds of problems with his or her plans. Maybe there’s someone else out to steal that priceless ruby, or your passive character gets thrown into situations in which he or she can’t possibly survive without acting. Either way, this is the meat of the story—who wants to read something without conflict? It’s also the setup for the next step, in which we learn much more about the character…

3) Reaction: This is arguably the most important step in bringing the character’s true personality out. For example, let’s take Jay Gatsby from The Great Gatsby, a book most of us have likely read. Gatsby’s conflict was his love for Daisy, a married woman from his past, and his obsession in winning her over despite her flighty mixed messages and complex dedication to her husband Tom. If Gatsby’s reaction to this conflict was to back down rather than pursue her, would things have wound up differently for Gatsby? Would he not only be alive, but a different person altogether? It’s his (re)actions that make him the mysterious, somewhat pitiful character he is, just as it’s Nick’s somewhat passive (re)actions that make him such a fantastic narrator.

4) Change/Results: (Note: I add “results” to this final step because there does exist a type of “flat” character arc in which the character in question doesn’t technically change, but instead influences other characters. However, listing the numerous kinds of character arcs can get complex and lengthy.) At the conclusion of the story, there should be a takeaway for the reader, and that usually involves a satisfactory resolution with the characters. In most arcs, a character changes for either the better or worse. In order to pull this off successfully, the writer must make the change believable as a result of the character’s goal, conflict, and reaction.

Of course, this arc may seem familiar: it’s very similar to that of plot. This is where many, including myself, argue that plot and character arcs shouldn’t be considered separate. Whether your plot influences your characters or your characters influence your plot (or a healthy mix of the two), there will always be both at play in order to make a cohesive story with a convincing beginning, middle, and end.

Have you worked with character arcs before? If not, take a look at today’s writing prompt on our Facebook page and get to work!

Come Sprint With Us!

We are currently hosting the following regular sprints, as well as numerous impromptu sprints, on our Twitter each week:

What We Write About

Hot Off the Press